Today I’m going to be talking about a technique you can use to inject your world with conflicts, situations and drama, by drawing a new overlay for your map. This technique is inspired by the Paradox Games such as Crusader Kings 2 and Europa Universalis 4.

(I imagine many worldbuilders have already played these games, but if you haven’t check them out. You’re in for a treat).

What is a Culture Map and what does it do for me?

The aim of the culture map is to give you material to work with when it comes to your history. It is a way of breathing life into your world. The tool directly creates situations which you can choose to develop. Rather than working through your countries one by one, it allows you to build up several at once by generating situations for you. For example you might have a country that is populated by a several different cultures, bordering a country with a culture of a different group. You as the worldbuilder can take this and develop it. This country might be a diverse land with different tribal ethnic groups squabbling for power, but prevented from civil war by the threat of the neighbouring barbarians bringing with them a completely different and alien way of life.

Even though I had info on different countries, and a good idea of their culture, the political map can still look rather static. I found it hard to weave a nice history around the states. I felt like I was following a checklist, disputed succession here, ethnic minority rulers here, civil war there. I was getting caught up in how different cultures should be from their neighbours, whether there is a common religion across this region etc and a Culture Map can help overcome this.

We’re going to create something like this. You can use this on your current world or on a new world. If its your current world, I would suggest hiding the nation boundaries so you don’t follow them too much, then enabling them at the end and taking a look what has developed.

How to do it

This guide assumes you are using GIMP, PS, or program that has layers.

Colour in different areas on the map to show the (dominant) cultures there. I prefer to do each separate culture and then group them after into different culture groups, or religions. 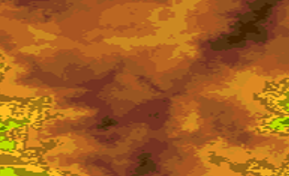 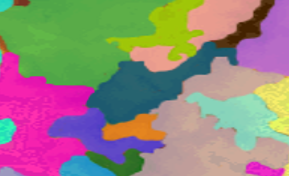 Darker brown areas indicate higher mountains. Mountain ranges will form natural boundaries to cultures, such as those dividing Pink and Green. In this section of the map we have several cultures nestled around the mountain peaks .The Blue culture, in the centre, is localised in the higher regions of the mountains.

In this section of the map, you see an area of Green culture cut off from the majority of their kin. They are separated by high mountains (brown) and the Purple culture in the lowlands. The people here are likely to want to reunite themselves with one another

Here there have a number of small cultures on the islands. Brown culture hugging the coast where Blue dominates. In the East, Purple holds on in to two remote areas. Perhaps they are a fading culture, once dominating the lands between them too?

Many cultures have a similarities. Several may share a religion or the same cultural roots. They have more that binds them than separates them when they consider their similarities and differences.

Use the Fuzzy Select Tool (select area of continuous colour). Holding shift, select all cultures of the same group. Select a new layer. Then Edit – > Stroke Selection. I used 3px as width.

Drawing country borders using criteria such as those above will ensure your countries will broadly match your cultures. If you already have borders, simply re-enable them and take a look and see whats being going on.

Putting It All Together: Plot Points

Using this technique, you can generate loads of plot points or areas of history for you to explore.

Take this section of the map. 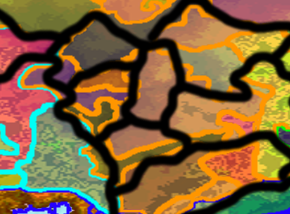 So you can see how much material and inspiration a culture map can give you to develop your world and its history. It can be a great way to breathe life into your world and be another way to look at it.