So you’ve got your map, your environment. Now its time to place those villages and breathe some life into your world. Settlements can include anything from hamlets all the way up to massive cities, and there’s usually a couple of factors in common. They can be temporary or permanent and the temporary ones can eventually become permanent.

These might be the first permanent settlements in the area, by your very first villagers.

Most settlements are founded to serve a function, or in response to something.

Some of the sites where settlements may be founded might include.

Water access will provide the village with fresh water, a food source, a means for disposing of waste (elevation was useful for this as the waste is washed quickly down the hill), trade access (its easier, quicker, often safer and cheaper to transport goods along river rather than lugging it across land) and defensive positioning as its hard to attack across a river, plus villagers can get away easily on boats if raiders come knocking.

If the village is ill suited to defend itself , or lacks other essential resources, then it is likely to suffer and people may move out over time, perhaps abandoning it eventually. Of course, the people might be more attached to the location and take steps to improve their defenses. This might happen if the village is producing a valuable resource that they are profiting from.

So, people need a good supply of the following resources;

Lots of villages pop up in locations where there is a natural resource that people want. A village might be set up in an area of fertile land to support the local farmers, it might pop up where a metal ore has been discovered. If you followed the previous Resource Map tutorial, you’ll have a good idea of where some of these might be. The town may not still produce the resource. The town might have once been a mining village that grew over the years. Eventually the mining reserves ran out, but the village was a town by this point and had become a major trade hub for the area.

New Settlements in the Area

This section covers settlements in areas where there might already be a number of villages, or towns.

Its a good idea to think of the following when placing a village, why was this village founded here, what does it produce and what is its purpose?

Villages grow over time and some end up developing into towns and then cities. Trade routes are likely to form, linking these places, as well as roads on the routes people take to get from place to place. Villages on such routes might see an increase in demand for their services. An inn might be built to house travelers for the night, the tavern might grow busier as travelers unwind from a hard days work, the more people might visit the blacksmith to repair their damages. As these people profit, they will spend more in their local area, people might move in as the industry grows and before you know it your little village has made a name for itself and has become a town. Where two trade routes meet is a good place to found a settlement as there will be a lot of traffic passing through here. Settlements that don’t have access to a certain good will need to acquire it through trade.

The distance that people can travel in a day plays a role too, as travelers would not stop in the middle of the day, but when night is drawing in. Consider the modes of travel that people use, do they walk, ride a horse or in a carriage, fly, drive etc as well as the terrain they are passing over as this will impact the distance they can go.

Elevation also plays a part in the placement of a village. Areas on higher areas of land are easier to defend and act as a natural lookout point, but they are also less likely to flood and so more important buildings might find themselves higher up the hill where they are less likely to be damaged. It also emphasises their importance as they are “elevated” above the rest. In this way, military, religious and political figures and would strengthen the position as above the masses.

There are many cities that follow this model such as Thebes, Persepolis, Athens, Rome, Kiev, Madrid, New York, San Francisco, but there are some that don’t and they find themselves well know for being indefensible and regularly captured such as Londan and Paris.

Some locations might be hard to find and settlements like monastries, that were self-sustaining and solitary might be built in hidden valleys to avoid being spotted.

Here’s a good little image I found showing some placements that might occur. 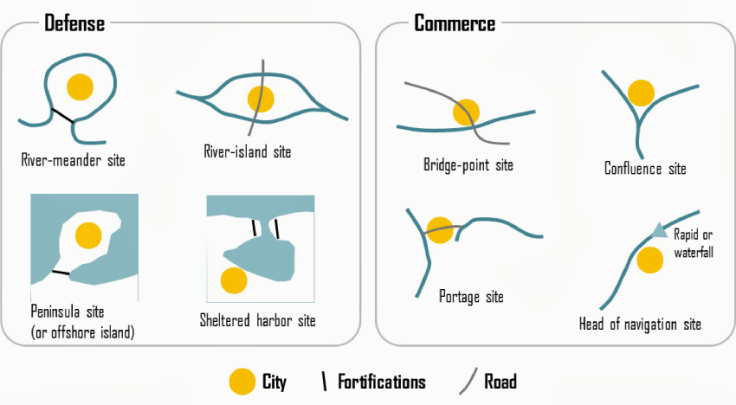 River-meander site – Shrewsbury, Shropshire, UK: Really good example of it too, because the fortifications are still there – the castle at the neck, and the town in the middle.

Portage site – Corinth, Greece: In fact it was a land and sea portage site, as it controlled movement between mainland Greece and the Peloponnese by means of being situated on the isthmus, and it had two ports between which there was a smoothed road over which baots could be hauled from the Corinthian Gulf to the Saronic Gulf. Now there’s a canal there.

Confluence site – Kuala Lumpur: is situated at the confluence of the Gombak and Klang rivers.

Sheltered harbour site – Vannes, Brittany, France: It’s actually a double example. There’s the Gulf Du Morbihan, which has a narrow access from the sea then spreads out, but then there’s a second narrower entrance into the inner part of the gulf around which Vannes is located. Lovely town too.

As always, its your world, so feel free to place your settlements where every makes sense for your purpose.

One thought on “Placement of Settlements”