The section is going to be about creating some basic morphology for your naming language.

Morphology deals with the morphemes that exist in your language and how your words are built up. Morphemes are the smallest units in a language that have any sort of grammatical meaning. These are things like roots (book, man, tree) and affixes (un-, -s, -ly, dis-). There are two types of morphology you should know about, inflectional morphology and derivational morphology.

Inflectional morphology deals with the addition of morphemes to a root (such as affixes) or the changing of the root itself to show grammatical information. These are things like the –ed in “talked” that shows past tense, the –s in “dogs” to show plurality, or the way that “I” changes to “me” to show that the speaker is the object of the verb. For the purposes of a naming language the most useful will be some way of marking plurals. There are of course several ways to do this. One is to just use an affix like English does. Affixes can come in various places. There are prefixes and suffixes which attach before and after their base word respectively. Then there are infixes, which are inserted inside of their base word. A great example of this that is taught to every student of linguistics is the infix which occurs in English. For the sake of being polite, I’m going to use its lesser form “freaking” as in abso-freaking-lutely. There are also circumfixes, which go around their base word. Another possible way to mark your plural is to use a process called apophony, which is the changing of sounds within a root. An example of this from English is “foot” becoming “feet” in the plural. Of course you don’t have to change the vowels. You could change the consonants instead. This could give something like “foot” becoming “voot” or “foon”. Reduplication involves duplicating part or all of the root. So if “sata” is “mountain in your language, “sasata”or “satasata” would be “mountains”. Lastly, you could just not mark the plurals in any way. This is something that Japanese does. I could easily say “I have three book” and you would know that I have more than one book because I said a number with it.

Being able to change nouns and adjectives into the other is especially useful for map labeling. Some other useful ones are ways of denoting “person who does X” as in the writer example above and “place/land of X”. As an example, these are some of the words that could be derived from a root meaning “horse”: 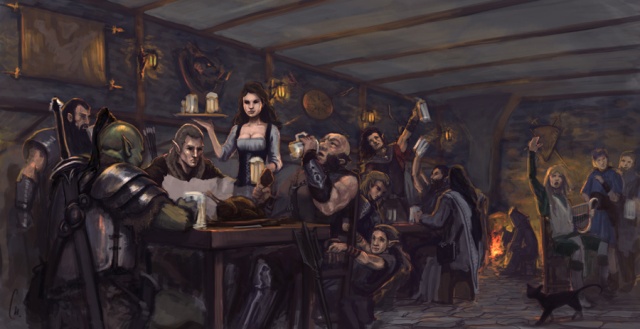 Another form of derivation is compounding, that is, smushing two or more root words together to form a new one. Examples include doghouse, Oxford (a ford is a shallow place where water can be crossed), and Neuchâtel (literally “new castle”). When coming up with a new word for your language, think about whether you want that word to be its own word with a unique root, some derivative of another word, or a compound of two other words. For instance, while English has separate words for “king” and “queen”, another language might just use the same word for both, have “queen” as the feminine form of “king”, or in a matriarchal society “king” might be the masculine form of “queen”. All languages have their own preferences for how they form words and as always there is no real right or wrong answer.

A good use for morphology, derivational morphology in particular, is in your naming conventions. Here are some ideas for where names can come from:

–          Any other objects that your culture values – There was once a great Mayan king named Pakal, which literally just means “shield”. Similarly you could name your characters Sword, Ocean, or Mountain. A sea faring people living on an archipelago might name their children after different kinds of fish or marine life such as Coral, Turtle, Stingray, Sunfish, and Eel.

–          Children may be named after what their parents hope or think they’ll grow up to be – King, Sailor, Hunter, Winner (Victor from Latin).

–          Having a way to turn adjectives into nouns allows for names that embody the positive attributes of the person. Names that translate to things like “the swift one” “the strong one” “the holy one” come to mind.

–          Of course, you could just use adjectives themselves for names – Lucky, Bold, Strong, Beautiful. Some cultures may even name children after objects themselves.

A diminutive is a morpheme that marks a root word as being small or little. They are also often used to show familiarity or endearment as with nicknames. Having a diminutive would allow for names like “little oak”, “little hunter”, or “Darling king”.

On the opposite side are augmentatives, which mark something as being big or large. Using these can give some of your people important titles, like Great Warrior.

Compounds that make use of a verb are also a good source for names. Timothy comes from the Greek “Timotheos” meaning “honouring God”. Michael comes from Hebrew and translates to “who is like God?”. Here, it might be good to have a way to nominalize/adjectivize your verbs (if you have them). But you could also use noun/noun or noun/adjective pairs such as “Fireraven” or “Redbear”.

Lastly, if you’re having some trouble coming up with a meaningful name that’s to your liking, don’t sweat it. You can just make up a word that fits your language’s syllable structure, and leave the meaning as lost to history. This is how most names in English and a lot of the western world are now. No one thinks of the name Timothy above as meaning “honoring God”, it’s just a name. Same deal with Rachel, which comes from Biblical Hebrew for “ewe” (a female sheep). And if you think of a good one later, you can always come back and add it in.

Last names or family/clan names are also something you may want, though not everyone has them. But these other names have just as many and varied sources as given names

–          They sometimes can come from professions, such as Smith, Baker, Carpenter, Knight, etc.

–          Another place to get your family names from is where that particular family is from; Di Napoli, London, or even something that translates to “of/from the forest”.

–          Of course it doesn’t have to be overly complicated. Last names can also just be nouns or adjectives such as Jack White, John Snow, Ragnar the Bold, Mary the Great, etc.

–          Names can also come from the father’s name as in Peterson. In Icelandic naming, this is how last names come about. Using a rough Anglicized example Jon Peterson’s son might be named Erik Jonsson, while his daughter would be Erika Jonsdaughter.

–          Patronyms are also common throughout the world. These translate to something like “son of”. You could use a morpheme on the father’s name to mark this, as in Russian; Mikhail Ivanovich – Mikhail son of Ivan. You could also have it as a separate word as in Arabic; Ali ibn Muhammad – Ali son of Muhammad. Or you could just leave the father’s name alone, giving you something like Paul Brian. If you have a matriarchal society perhaps family names might come from the mother such as Janesdaughter. Matronyms are also quite common.

How you choose to structure these names is up to you, and may say a lot about your culture and their society. Some groups just have  a first – last name system. Others bring larger encompassing clan names into the mix. And as I said above, don’t have the concept of a family/clan name. Though people in plenty of groups in North America will have several names, ranging from a given name, nicknames, special titles, and even personal names so secret no one knows them

Experiment with your language’s morphology and be creative with your names! They’ll say a lot about your culture. And even if you don’t want to create a naming language, hopefully these past two sections will give you some inspiration for names anyway, such as Garnet the Great, Empress of the Holy Isles – Captain “Old” Joe Tinsmith from Six Mine City – or Emma “Tankrider” Leatherman from Wheelport.

So for this supplement, I’d like to bring up a topic which doesn’t get talked about a lot with naming languages – morphological typology. I know what some of you may be thinking, that you didn’t sign up for any hardcore conlanging. Well there’s no need to worry. We’re not going to get into any theoretical implications or weird quirks of grammar here. I’m going to keep definitions broad and simple.

While it sounds complicated, morphological typology just refers to how your words are structured. I’m only going to reference three basic ones here as I feel they’re the most useful for making naming languages.

–          Isolating/analytic – Only one morpheme per word. That is, everything is its own separate word. So rather than “dog-s” you have “many dog”, “walk earlier/yesterday” instead of “walked”. Analytic just means that the language allows some compounding and derivational morphemes, but still no inflections. Examples of this would be Vietnamese and Mandarin.

–          Agglutinative – Here, each morpheme has only one meaning and they remain distinct from each other. This means that in order to build up larger meanings (derivationally and inflectionally) they stack together. This can sometimes result in rather long words Turkish and Finnish are good examples of this kind of language.

–          Fusional – These languages have multiple meanings per morpheme – such as Latin or Russian. This results in somewhat smaller and more “compact” words. For example the Latin suffix “-os” tells us that the noun is second declension, plural, and the direct object of the verb (accusative case).

The point of all this is, that typology is just another variable which can influence the names of your places and characters. Shin Ral Wis from Dok Sen Te is very different from Kualahimi from Ammilagiga.

If you have enjoyed this blog or found it useful and would like to support us, consider pledging using Patreon. This will be most appreciated and will help us expand what we can offer.

Our current target is $3 a month, to cover domain name costs, we are currently on $1.

We also have a poll open on setting up a forum to build a community here. Let us know your thoughts.

Thanks very much, and see you next time.